Unlike most other slicing software which generates net shape programs for small thin print beads and only works with .STL files, LSAM Print 3D works with true CAD file formats commonly used in industry, including solids, surfaces and meshes. It is designed at its core for industrial “near-net-shape” additive manufacturing applications with features tailored to large parts printed at high rates using large print beads. 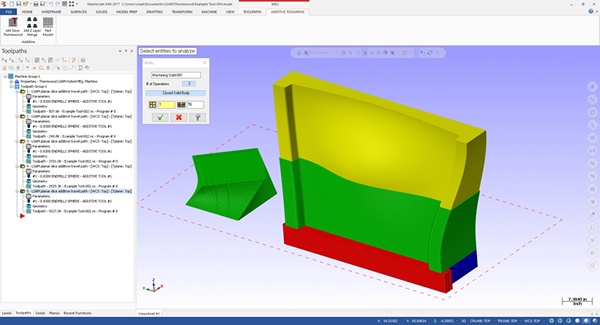 “Near net shape” additive manufacturing is a two-step process where the part is first printed at high speed to a size slightly larger than needed and then trimmed to the final size. Net shape software can be made to work for small “near net shape” parts provided small print beads are used, but net shape software doesn’t work for large structures printed at high speed using large print beads. LSAM Print 3D is specifically designed for large scale “near net shape” industrial applications.

A new concurrent printing feature has been added with which multiple parts can be printed concurrently, dramatically improving throughput as well as offering some interesting new possibilities.

The system operates by printing the first layer of each part, then the next layer of each part and so on. While this appears rather simple at first, it is not quite as straightforward as it first appears. If all the parts are made essentially the same way, it is, in fact, simple. But in many cases, different parts may be printed differently, using different printing parameters and/or layer definitions. One part may be totally solid, the next completely open. One part may have thin walls the next thick walls. The software allows each part to be independently designed without regard to the others and can still print them concurrently. 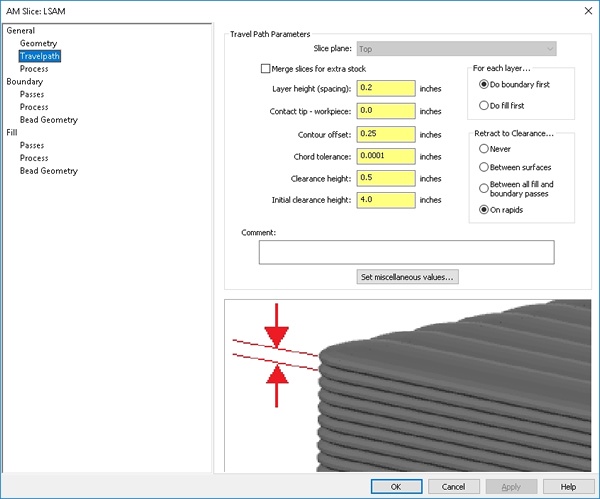 The major production improvement that results from this new ability is due in large part to Thermwood’s high output print head and large table sizes. Versions of Thermwood’s print head have been tested at output rates of over 500 Lbs/hr. To understand how this works, you must understand the unique nature of Thermwood’s print system. Unlike traditional FDM printing techniques which print slowly onto a heated table in a heated environment, Thermwood’s LSAM machines print at such a high speed that the process must be continuously cooled rather than heated. All the heat in Thermwood’s system comes from the print head.

Using Thermwood’s print system, the current layer must be cool and stable enough that the new layer doesn’t distort it, but must also be warm enough that it fuses completely with the new layer. With carbon fiber filled ABS for example, even with fan cooling, it requires at least a minute and a half wait time between layers. Higher temperature materials can generally be printed at somewhat faster rates but, Thermwood’s high speed print head prints most part layers, even large parts, in much less time than that.

Instead of pausing or running really slowly to accommodate the minimum wait time between layers, multiple parts can be printed in the same amount of time, provided there is enough available table space. Thus, the faster the print head and the more available table space, the more parts you can print concurrently. With this new feature, the ability of the software to concurrently print dissimilar parts is not a limiting factor.

Print Parts Side by Side or on Top of Each Other

Many times, really large parts or molds are made in sections that are then combined into the final structure. Multiple sections of these type of parts can now be printed at the same time, reducing print time for large structures by as much as 80%, while still adhering to the minimum time between layers dictated by the thermoplastic material. In addition to dramatically reducing average print time, there are other important aspects to this new capability that aren’t obvious at first. 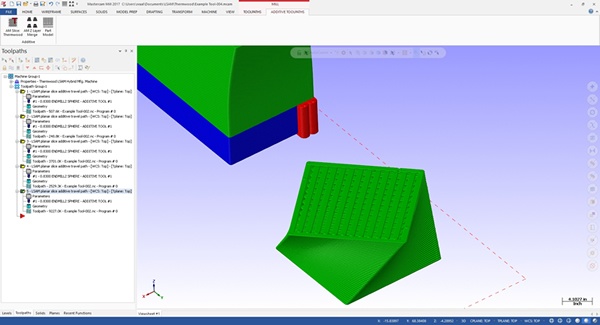 As an example, when you need a more complex part, you can design it as two or more separate parts and then print them next to each other or even on top of each other so that they fuse together during the print process, resulting in a single complex structure that would be difficult to program and make any other way. Internal supports are no longer restricted to just standard infill patterns. As interesting as this is, it gets even more involved.

Differences Between LSAM Print 3D and Other Slicing Software

Current FDM slicing software focuses primarily on the outside shape of a part. Infills may be used on the part interior, but there are real limitations to the use of standard infill patterns.

Thermwood’s new software capability can begin printing a part at any layer above the table top. There is an interesting reason why you would want to do this.

LSAM Print3D software supports an all new way to design and print parts with highly complex interior features. It does this by using a fundamentally different approach to part design and printing:

This opens a whole new world of part design to additive manufacturing and dramatically broadens the capability of the underlying technology. 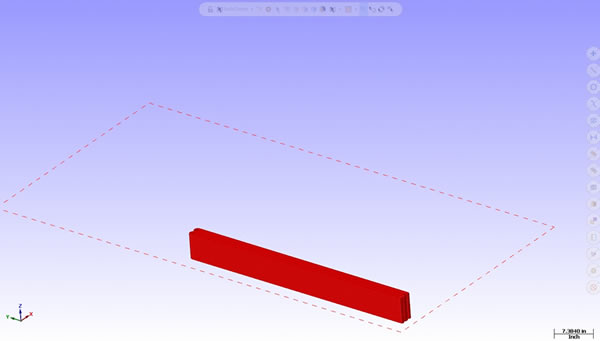 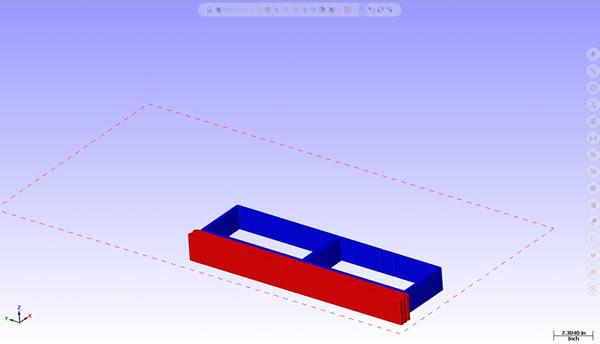 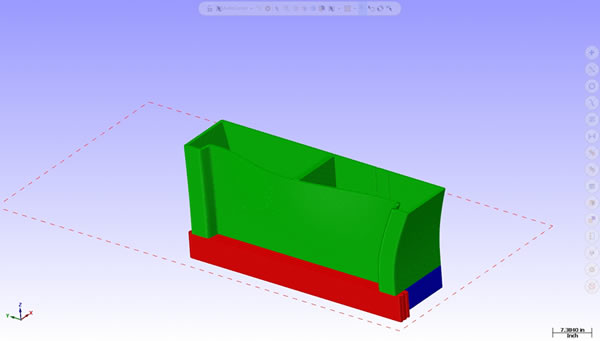 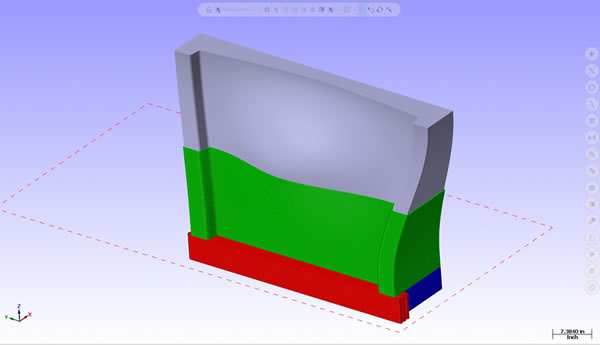 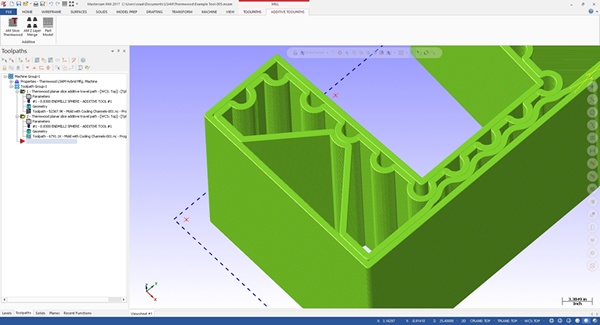 Another interesting new feature is the ability to design interior walls as part of a CAD part design and have the software recognize these as single bead interior support walls and automatically develop a program to print them as designed. The software has also been taught specific operational characteristics of the of the LSAM machine which it automatically takes into account when generating a slicing program.

Automatically Generates a CNC Program Ready to Run on LSAM

Output of the LSAM Print 3D software is a CNC program ready to run on the LSAM print gantry. No additional CAM or post processing software is required. 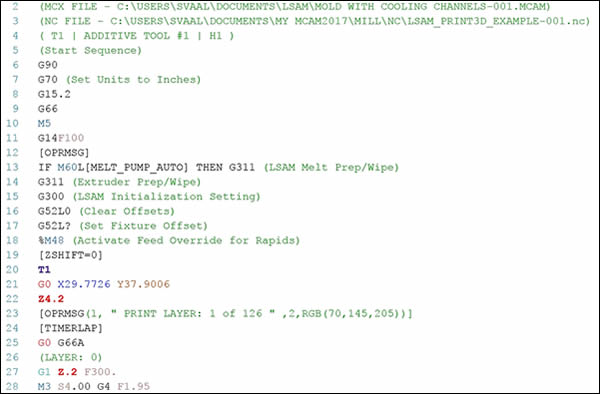 Thermwood maintains an ongoing additive manufacturing software development effort and expects new features to be developed and released on a regular basis.

“We are at the very beginning of this new technology” says Thermwood’s Chairman and CEO, Ken Susnjara. “There is still a lot of unexplored territory and challenges to address”.