For AWFS 2021, Thermwood Corporation, an innovator in the design and manufacture of 3 and 5 Axis CNC Routers, is proud to demonstrate two systems. We’ll have our versatile and affordable CabinetShop 43 510-8 and our powerful Cut Ready Cut Center machining on site. 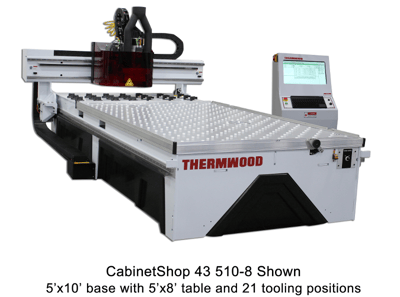 We will be machining plastic sheets, signs, outdoor furniture and nested based applications on our CabinetShop 43 510-8 CNC Router. This machine features a 5'x10' base with a 5'x8' table, allowing it to offer 21 tooling positions with its automatic bar style tool changer. It also has an improved dual pipe dust collection system, programmable pop-up pins, auto tool length measurement and an automatic lubrication system. This configuration is also available as a 512-10, with a 10 foot table on a 12 foot base. Auto labeling and an unload rake system for nested based production are also available as an option. 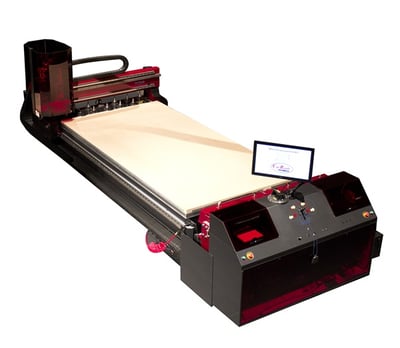 Thermwood will also be demonstrating the award-winning Cut Ready Cut Center. This powerful system helps you quickly and easily create most products a cabinet shop would want to make without a CNC programmer (cabinets, furniture, doors, drawers, moldings, stair stringers and much more). Just tell it what you want to make via a simple touch-screen interface, and it makes it. Or, you can operate it as a traditional CNC router.

Most people can operate it with little or no training or guidance. It is complete, fully contained with all the ancillary equipment smoothly integrated into a package that almost runs itself. 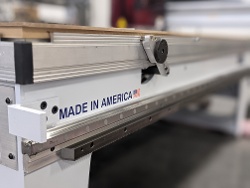 We'll be demonstrating live on both machines during the show, as well as operating an eCabinet Systems kiosk.  Our eCabinet Systems expert will be designing nested-based applications on the fly to send to the CabinetShop 43 to be machined.  In addition to our Cut Center live demonstrations, we will also have two Cut Ready kiosks, where you can explore the software and see just how easy it is to design most things a cabinet shop would want to make.

Please visit our booth (#1701) and speak to a Thermwood representative to learn more about these two powerful and affordable additions to any shop!

What are the Differences Between a Cut Center and a CNC Router? Take a Tour of the Cut Ready Cut Center Thermwood is proud to announce that we will be awarding three scholarships to dependents of associates for the Class of 2021. Each recipient will receive a $2,000 renewable scholarship.

Since the introduction of these renewable scholarships, Thermwood has awarded over $200,000 to students wishing to further their education.

Leah O'Brien is the daughter of Jennifer and Chris O'Brien of Stendal, IN.  She is a graduate of Southridge High School.

She has been involved in FCA, Natural Helpers, SHS Choir, Yearbook and St. Mary's Youth group.  She was also a member of the Swim, Cross Country and Track teams. 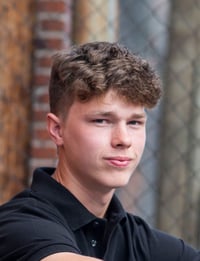 He has been a member of Beta Club as well as the Basketball, Tennis and Golf teams.  Aiden has also been involved with Riley's Dance Marathon.

Aiden plans to attend Purdue University in the fall to study Engineering. 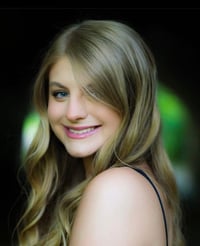 Kylee Vaal is the daughter of Courtney and Scott Vaal of Jasper, IN.    She is a graduate of Jasper High School.

She has been involved in FCA, Octagon Club and SADD.  She is also a volunteer for the Redemption Church Kids Ministry.  Kylee was also part of the Soccer, Basketball and Unified Track teams.

Kylee plans to attend the University of Southern Indiana to study Biology.

Thermwood would like to congratulate all seniors of the Class of 2021 and wish them the very best in their future studies and endeavors!