The tool was printed on Thermwood’s LSAM 1020 dual gantry print and trim system. While this machine is equipped with Vertical Layer Printing and could have printed the tool in one piece, because it requires that you to wait for each printed layer to cool enough before adding the next layer, it would have required 58 hours of continuous print time to produce a one-piece tool. Instead they decided to print the part in four sections, two at a time for a total print time of 29 hour and 20 minutes, cutting the print time in half. Printing required 3,613 pounds of material. 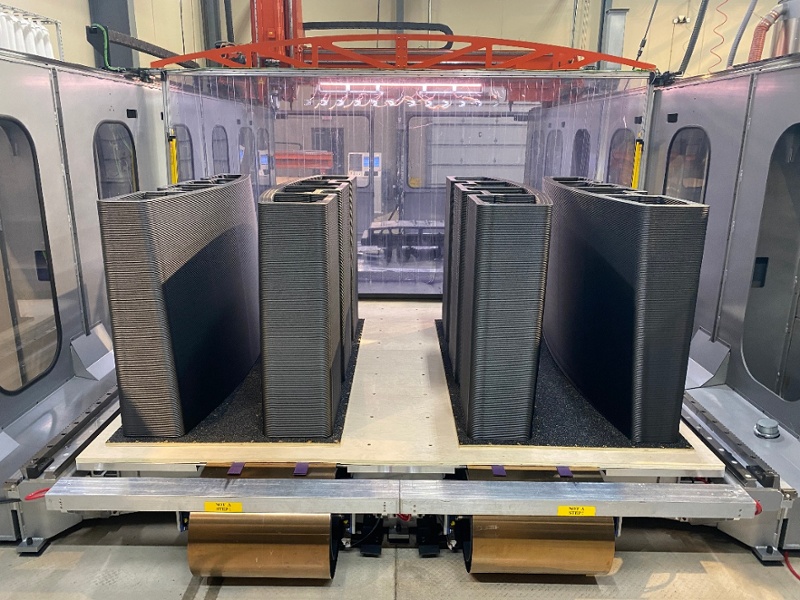 The four parts then needed to be machined and assembled. 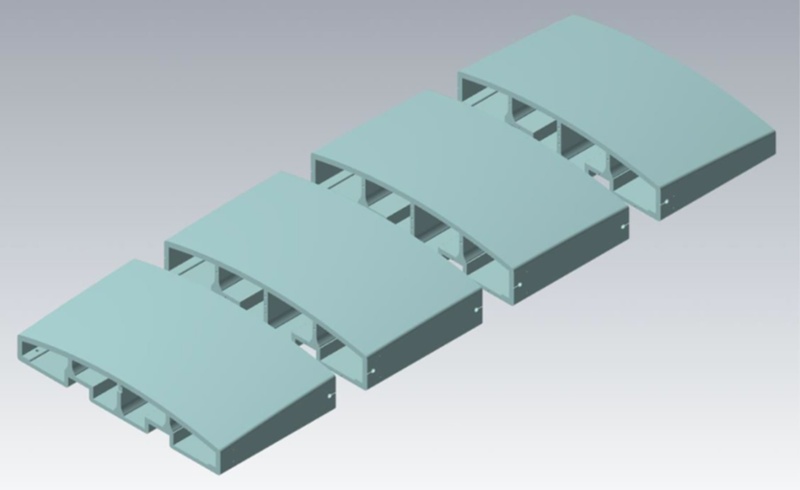 Layout of the Assembly

All surfaces of the parts except for the front working surface were then machined in place. 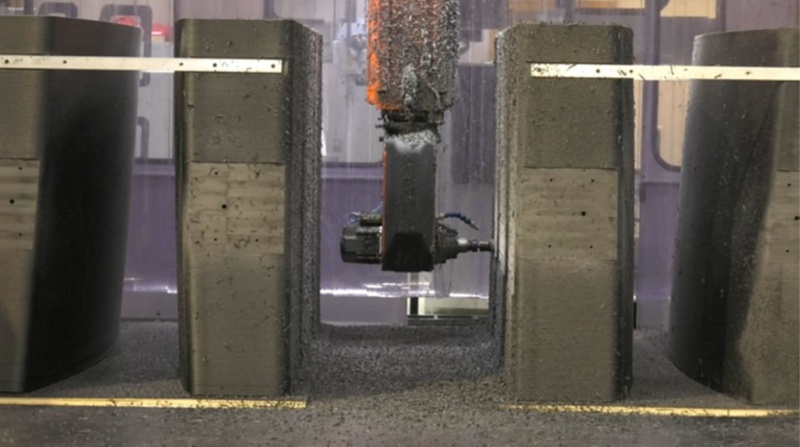 Initial machining.  The holes in the center of each side are for center-of-gravity brackets used for part handling during assembly.

The mating faces were then machined flat except for slightly raised bosses which insured proper gapping for the adhesive. Adhesive is only one part of a multi part approach used to permanently and securely attach the parts to each other. These are all highly accurate, precision surfaces. 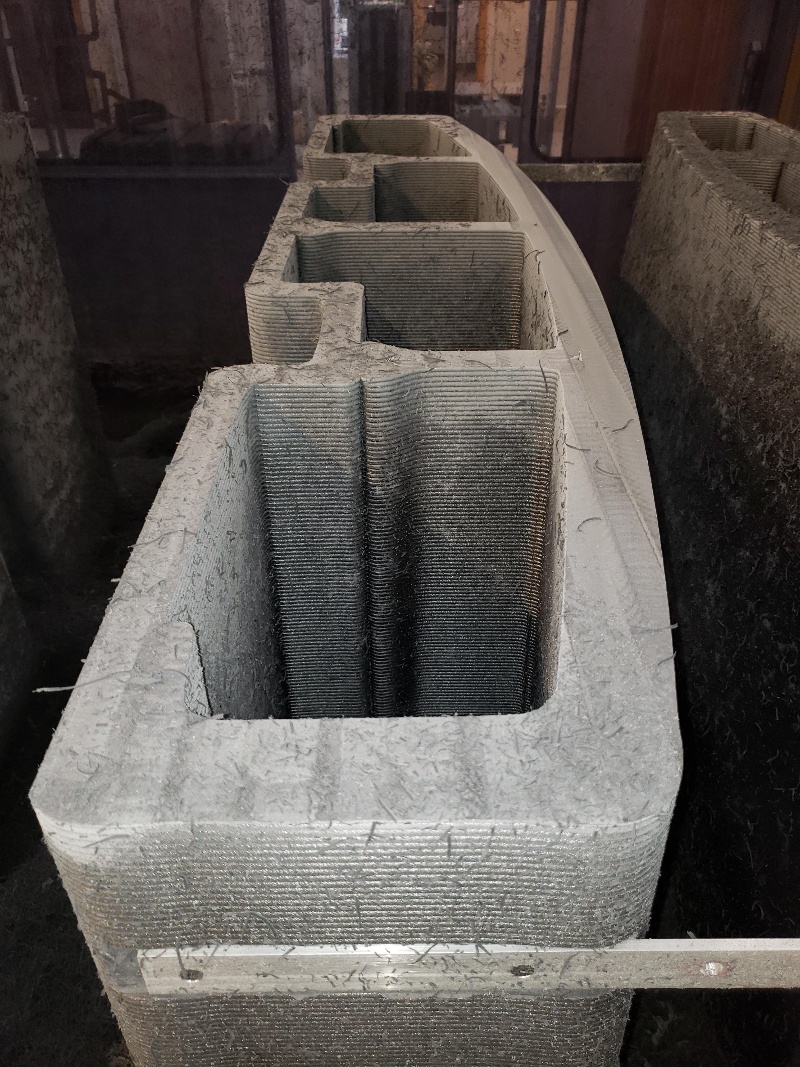 PUTTING IT ALL TOGETHER:

Draw bolt holes and slots were machined into the back of the tool which allow the parts to be bolted together in addition to the adhesive. 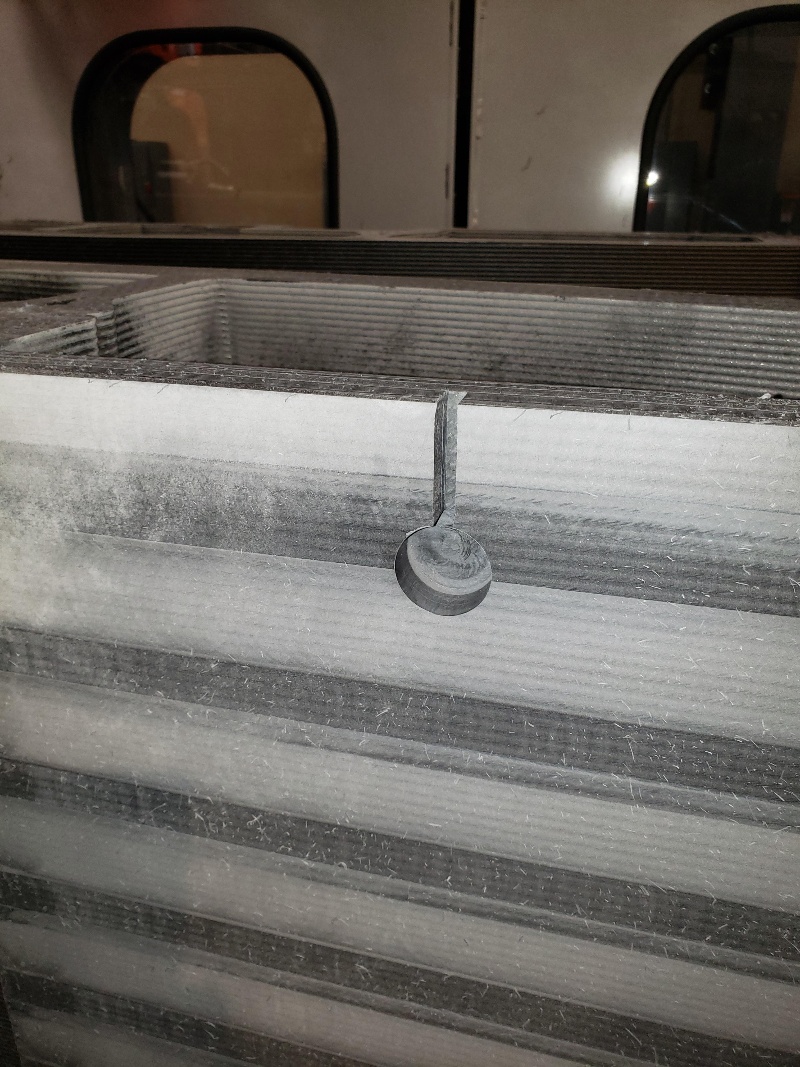 In addition to adhesive and draw bolts, alignment holes and countersink holes were machined into the center sections of the tool. 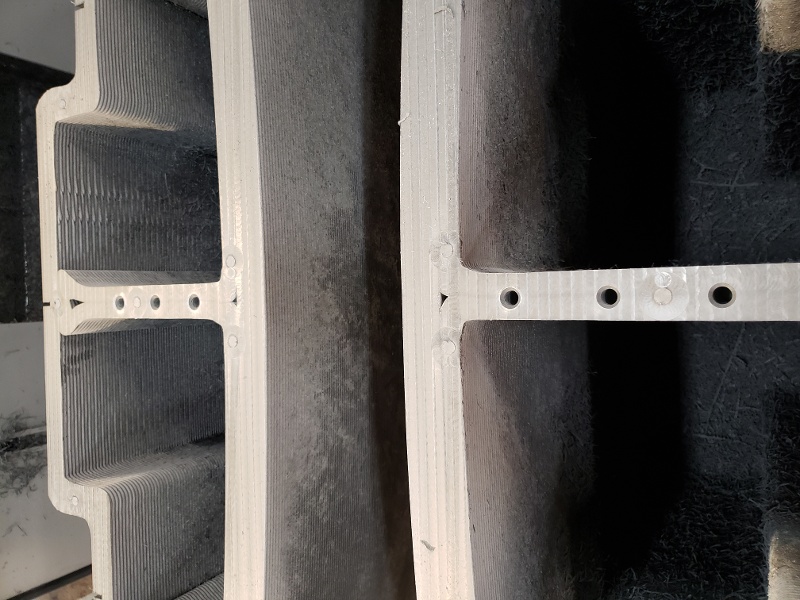 The 6-inch long alignment pins for these holes are machined with adhesive channels providing not only alignment between parts but also another level of permanent attachment. 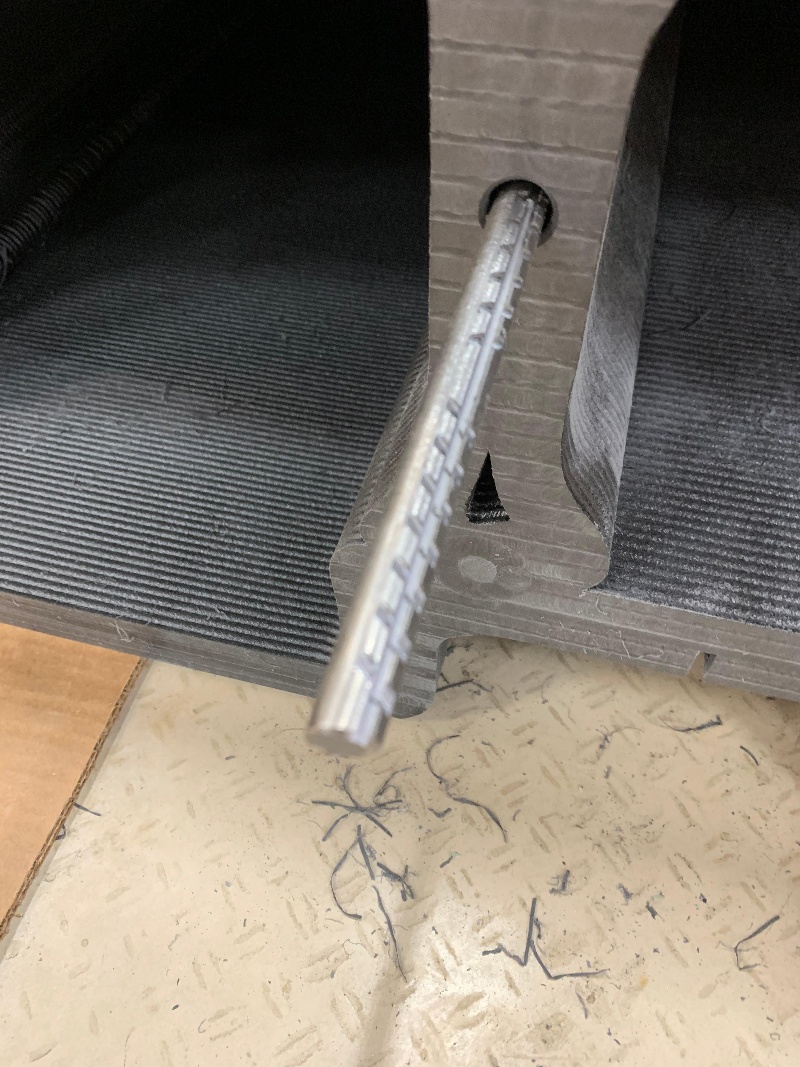 The next level of attachment uses brackets positioned inside the structure near the front surface, which are attached to each other using tensioned aircraft steel cables, securely holding the front surface of the four parts together. 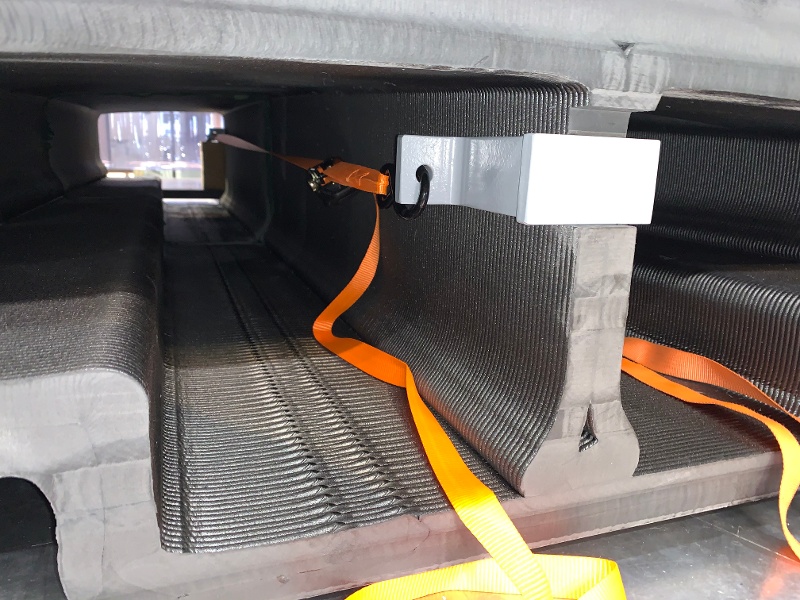 Brackets with temporary straps which were replaced by tensioned steel cables

The parts were then final assembled using another unique approach. Each part is relatively heavy and because of relatively short open time for the adhesive, there is a limited amount of time available during assembly to apply the adhesive and mate the parts securely together. The parts need to be pushed together while aligned, literally within a few thousandths of an inch and need to be mated absolutely even and square. This turned out to be fairly easy using the Vertical Layer Print table mechanism installed on the LSAM machine. 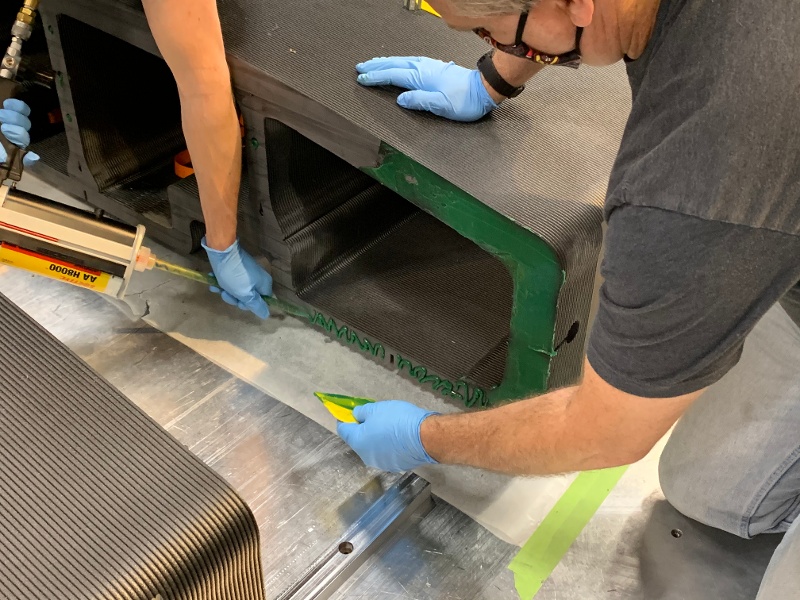 Adhesive being applied to separated pieces

Draw bolts and cables were permanently attached and after the adhesive fully cured, the completed tool front surface was machined to final dimensions using the LSAM trim head. When Spirit AeroSystems measured the final working surface it was within +/- 0.005”, well within their requirements. Total of all machining including the final working surface was 118 hours and 58 minutes. 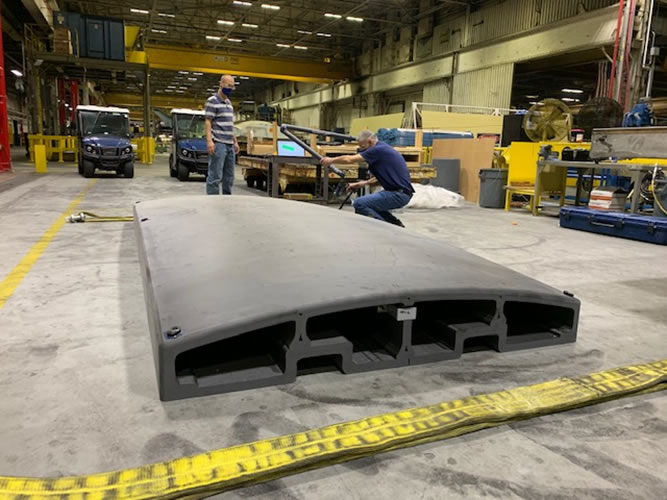 Spirit AeroSystems then stretched 10 skin panels of 0.050” thick 2024 T3 aluminum to 5% elongation. The press controller showed that each jaw gripping the aluminum sheet had ~100 tons of load on it, so ~200 tons in total. Everything was kept under the same conditions as if running a production part and although the printed tool was considerably lighter in weight than their traditional tools, it appeared to perform in a similar manner. 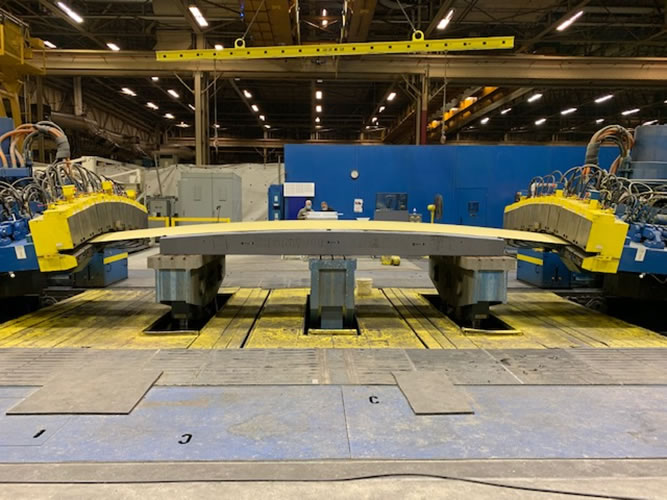 This is a first step. There are additional tests to be performed and more data to be collected, but it does appear that large 3D printed composite stretch form tools can be produced using currently available material and current equipment, saving considerable time and money and opening yet another application for this exciting new technology.

Thermwood is a US based, multinational, diversified machinery manufacturer that has become the technology lead in large scale additive manufacturing of thermoplastic composite molds, tooling, patterns and parts with its line of LSAM (Large Scale Additive Manufacturing) systems that both 3D print and trim on the same machine.

Thermwood CNC Routers and Tooling Recommendations for the Plastics Industry

Some of the basic tooling we use and recommend:

For more information, visit www.thermwood.com or give us a call at 1-812-937-4476. Our CNC experts will evaluate your production needs to help determine how you can reduce costs and increase efficiency. We also offer free live demonstrations of our equipment and software using your application and product details. This can help identify inefficiencies and areas of your current process that our machines could help improve.

Thermwood CNC machines are used across a wide variety of Industries.  One Thermwood Customer – Universal Plastics and Mayfield Plastics - are involved in the thermoforming of plastic materials.

Since Universal Plastics was founded in 1965, they have been a leader in the thermoforming industry.

The Universal plant has over 95,000 square feet and over 80 employees.  As Universal Plastics has grown, they have refined and further developed the thermoforming process to allow the manufacture of large and complex products that could never have been conceived in the previous generation. Today’s thermoformed products can match the quality and finish of injection molding, in high performance plastics, and in sizes that dwarf the capabilities of most molders.

Thermoforming tooling can be built from wood, composite, cast aluminum, or machined aluminum billet. Temporary molds are commonly built of wood or composites, which can be easily machined. Permanent tools are either machined or cast aluminum, depending on the depth of the tool. Thermoforming tools can be modified easily, so changes can be made quickly and for much less money than the hardened steel tooling typical of molded parts.  For this reason alone, thermoforming is often the better process if your design hasn’t been solidified.

Universal believes quality parts are a direct result of quality tools, and take great pride in making quality machined or cast aluminum tools that deliver consistent quality products year after year. Our 5 full time toolmakers have a combined 100 years’ experience in tool and fixture making and they build many of tools in-house.

Mold makers use cast aluminum molds for larger quantities production. Aluminum molds are designed by CAD designers.  Once designed, these mold designs are transferred to Thermwood CNC routers that produce the patterns required for the final mold. 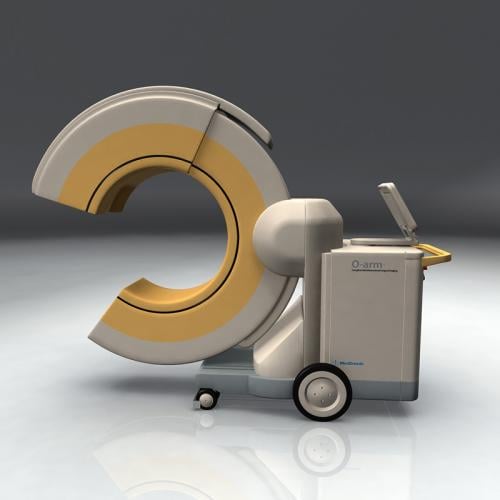 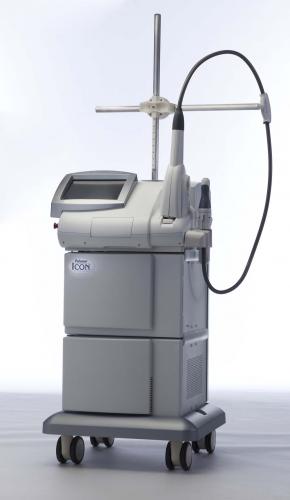 Also of note, the Western Mass Chapter of the National Tooling and Machining Association conduct several tours of member companies each year to give the membership a view of the diversity of the companies that do machining.  About 25 members of the WMNTMA visited Universal in February for a tour of their facility and in particular, to review the mold making and machining capabilities. Universal produces about 30% of their tooling and the balance is purchased from tool vendors around the country and area.

The Western Mass chapter has machine shops as well as vendors to the machining industry in their membership.

Royce//Ayr manufactures and distributes premium quality cutting tools for wood, composite, plastic, rubber and steel cutting applications for cnc routers and other machinery.  Royce//Ayr makes it easy to determine Feed Rates, Knife marks per inch & Chipload per tooth. View the recommended values in the charts located here and use the calculator to determine approximate settings for your machinery. The calculation results should serve as a starting point to determine optimum feed speeds and RPM for your machinery. 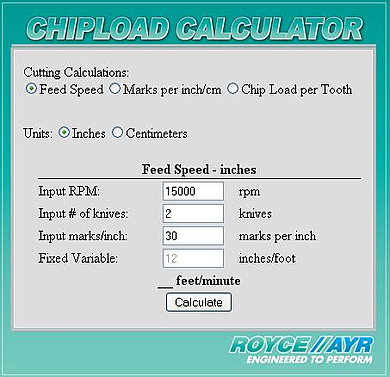 Find out how to increase your throughput and improve your bottom line using the latest tools in manufacturing automation.

A taste of CNC technology will change your manufacturing experience forever!

Forintek's new handbook Understanding CNC Routers provides you with an insight on the history of CNC technology as well as with all the information you need about tooling, software, vacuum pumps and the myriad of accessories available to the wood manufacturing industry.

You can order the easy to read 100-page handbook for $20 at publications@fpinnovations.ca or contact the author,
Alain Albert directly at 604-222-5613. 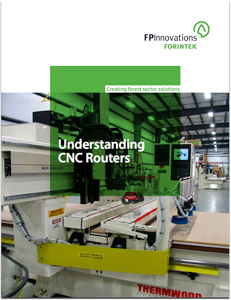