If you are planning to attend the 2010 ShopBot Jamboree held tomorrow April 23rd and Saturday April 24th in Durham, NC, you will want to check out the informative eCabinet Systems presentation hosted by Dennis Englert.

Dennis is the Manager of Product Training here at Thermwood, and is a guru with eCabinet Systems.  He is also the author and voice behind our popular eCabinet Systems Online Training program. 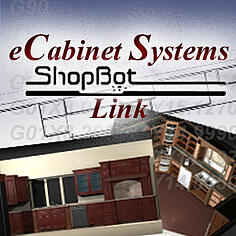 Make plans now to attend the Jamboree and experience the eCabinet Systems presentation for expert guidance and tips.

The new program is the result of a joint effort between Thermwood and ShopBot to expand the use of CNC in the cabinet and custom furniture business. The availability of highly capable but free design software that can output to entry level CNC routers should speed the acceptance of this technology in the marketplace and should ultimately expand the market for everyone.

Thermwood has recently restructured the eCabinet Systems program and added free access to a large collection of cabinet, furniture, closet and carving libraries. These designs, including the carvings, can now be machined on ShopBot CNC routers. For additional information see http://www.ecabinetsystems.com/.

Dale, IN April 7, 2009: -- Thermwood Corporation, a leading supplier of CNC routers and founder of eCabinet Systems, the world's largest cooperative of custom cabinet shops, announced that it has restructured the eCabinet Systems program to broaden its appeal and make the software easier to learn.

In addition to continuing to offer the design software free to manufacturers and professional cabinet builders, a major new feature of the restructuring is free access to a collection of cabinet, furniture, closet and carving libraries. " These libraries mean that most users can just download and build without having to first learn the software and create their own libraries", says Thermwood's Vice President of Marketing Jason Susnjara. "We also offer a program to modify these libraries or create all new libraries for individual customers if they want".

For those that want an in-depth understanding of the software Thermwood has developed an extensive web based training program modeled after its successful week long software class. Access to the program is on a subscription basis and Thermwood plans a continuous program of additions and enhancements.

Another major departure from the past is the ability to output code to machines other than Thermwood. Two interface modules have been announced; one to ShopBot CNC routers and one that sends rectangular parts from a job to an optimized panel saw and sends cut-to-length parts to a TigerStop. Thermwood believes these two additions will expand the program by allowing smaller shops to begin using low cost CNC routers and supporting higher volume, panel saw production for larger shops. Thermwood has established an all new eCabinet Systems web site, http://www.ecabinetsystems.com/ to support the restructured program.