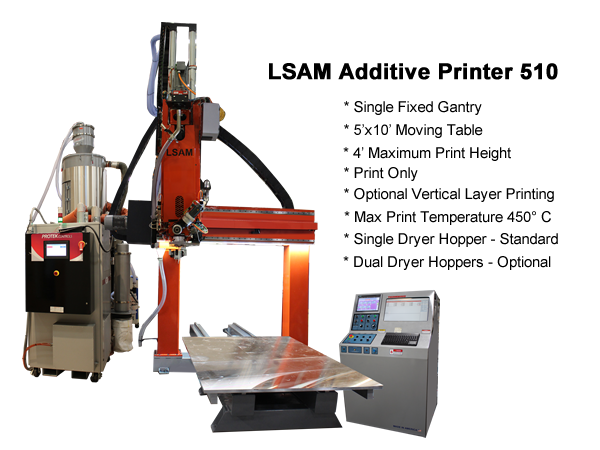 Thermwood will be printing high temp autoclave aerospace tooling on an LSAM Additive Printer 510 LIVE at RAPID + TCT 2021 in Chicago, IL September 13th-15th.  LSAM Research Laboratory at Purdue ADDITIVE3D Software will be on display as well, with Purdue representatives on site for demonstrations.  We will be printing a different material each day, donated by SABIC, TECHMER PM and AIRTECH.  This promises to be an exciting demonstration of the LSAM Additive Printer Large Scale Additive System.

Click the link below to Be Our Guest and register for a Free Rapid + TCT Expo pass and $100 off the Conference Registration Fee.

Make plans now to visit the McCormick Center and stop by Thermwood booth #E7628 to witness this live and in-person!

On Monday, September 13th we will be printing SABIC LNP™ THERMOCOMP™ AM EC004XXAR1 ULTEM compound.

On Tuesday, September 14th, we will be printing TECHMERPM PESU 1810 3DP.

On Wednesday, September 15th, we will be printing AIRTECH PEI DALTRAM I-350CF 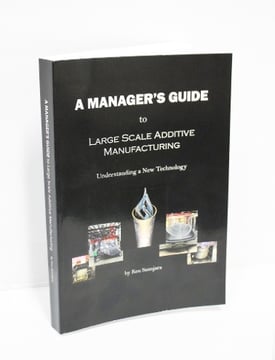 This 315 page book, currently available as either an eBook or paperback hardcopy, is intended to help non-technical managers understand the basics behind a new technology that is revolutionizing production of large composite molds, tools and other industrial and commercial products.

This book is currently available from Amazon either as an electronic file or as a printed hardcopy.

Who This Book is For

If you are a manager in an industrial company who might benefit from large scale additive technology, or, if your company is actively exploring this technology, this book will give you the background you need to participate and make better decisions. It will also help you cut through the confusion and crosstalk that often accompanies a new technology like this.

Industrial additive manufacturing is currently being used successfully every day to produce some of the largest composite parts ever made. These include large aerospace molds and tools, foundry patterns for various industries, chassis for electric busses and what is likely the tallest 3D printed structure ever made. Although the process results in substantial savings and dramatically reduces lead time, much of industry today still doesn’t understand or trust it.

In this book, the author, who was instrumental in developing the technology actually being used in industry today, explains in everyday, no nonsense language what it is, how it works, what actually works, what doesn’t and why. He provides a guide for non-technical managers to help them understand the basics so they can evaluate how this new technology might impact their company.

He explores all aspects of this process in clear, easy to understand language including the print process, polymers, software, trimming, cost savings, time savings, computer simulation and the practical, real world, aspects of getting into large scale additive. He includes sometimes humorous vignettes about surprises, missteps and stumbles during initial technology development and how they were handled.

The author, Ken Susnjara, is the founder, Chairman and CEO of Thermwood Corporation, the leading supplier of large scale additive systems for the production of thermoplastic composites. With almost 100 patents to his name, he was instrumental in the development of the underlying technology behind the most successful large scale additive systems today. 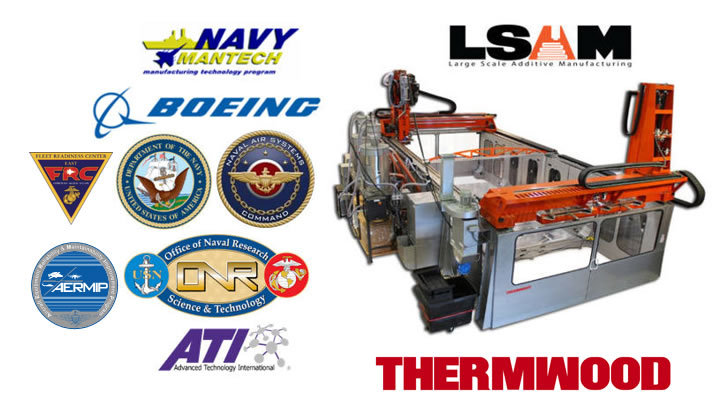 FRCE provided a high contour mold line surface to Boeing for generating the composite cure tool. The mold line shape was very aggressive and would stretch the large format additive manufacturing technology processes capability. The spherically shaped portion of the mold line offered the largest challenge, as the unsupported 3D printed angle limitation of approximately 45 degrees provides an interesting obstacle to overcome for the spherical mold line section of the tool. Boeing rotated the 3D print plane 35 degrees to avoid encroachment of the build angle limitation.

The new innovative build plane approach eliminated the requirement for temporary support material for the aggressive mold line shape. The new build angle would test the LSAM machine limits in an area never explored previously. TechmerPM PESU CF 1810 high temperature print material was used for the composite cure tool. High temperature materials present additional challenges during print over low temperature materials such as ABS CF. Two interim support features were added to compensate for the center of gravity shift of the print. The LSAM machine performed flawlessly during the composite cure tool print. The tool was printed in 7 hours and 26 minutes using 610 lbs of material.

The composite cure tool was machined in 53 hours using the LSAM gantry router machine. The tool datum features, and removal of interim members, were machined prior to removal from the bead-board. The Thermwood LSAM machine offers the ability to machine and 3D print on a single platform. The composite cure tool mold line part surface achieved at surface profile tolerance of .020” (+/-.010”).

The Boeing Research and Technology (BR&T) laboratory performed functional testing on the LFAM composite cure tool to ensure vacuum integrity and dimensional stability requirements were reached. The LFAM tool performed as expected and achieved all requirements. Several composite parts were fabricated from the tool. The tool durability was assessed during the multiple autoclave cure cycles and fabricated (3) composite parts. The tool maintained dimensional stability and vacuum integrity throughout the functional testing and composite part manufacturing.

Nondestructive Inspection (NDI) was performed on the composite parts fabricated on LSAM tools. The NDI results did not indicate any porosity. Due to the complex shape of the composite demonstration part several NDI process were employed. X-ray and C-Scan results did not reveal any delaminations or defects.

The program benefited from a cooperative effort among several contributors to achieve success. The partnership between industrial technology leaders, Boeing and Thermwood coupled with the Office of Naval Research’s drive to transition technology, led to the successful program. “Collaborations such as this help expand the scope of capabilities of emerging large scale additive technology by addressing real world challenges that would be difficult for any single entity to define and address by itself. We look forward to new challenges moving forward”, says Thermwood CEO, Ken Susnjara. 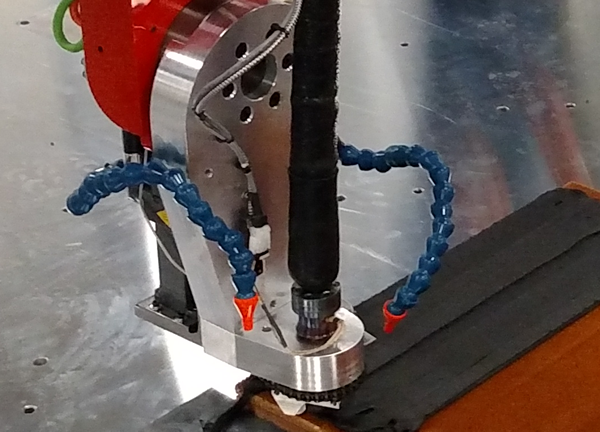 Thermwood’s development system has performed well during initial additive testing. It has been tested through its entire operating range. This startup effort included initial validation of an all new “MeltShape Technology”. Melt shaping promises enhanced control of layer shape and improved bonding between layers. This new patent pending approach uses one or more shaping wheels to shape, form and compress the hot plastic melt as it is being extruded, insuring that each new layer is the proper shape and thickness and that it bonds firmly to previously applied material.  Melt shaping offers a new and promising technique in the advancement of large scale additive manufacturing.

Featuring an extruder from American Kuhne

Kevin Slusarz, American Kuhne vice president of process technology, assisted with the start-up effort.  American Kuhne, a Graham Group Company, supplied the custom extrusion system for Thermwood’s development machine. The extrusion system performed flawlessly during initial testing. Extruder controls are designed to smoothly network and integrate with the machine control. “We are quite pleased to have a partner like American Kuhne as part of this development program” says Ken Susnjara, Thermwood’s CEO.

The material processed during startup testing was a 20% carbon graphite filled ABS from Techmer ES. Thermwood is in discussions with other material supplier to test their material in this new application.

Thermwood’s melt shaping approach to adding material offers several significant advantages. Because layers are rolled together, rather than tamped together, air between layers is squeezed out during the additive process, so it is much less likely that air becomes trapped between layers. This was borne out during initial testing which produced virtually void free walls. This addresses the problem of trapped air delaminating layers when a part is processed through a heated autoclave, which is a common requirement for aerospace parts and patterns.

This approach uses a melt shaping wheel that interact with the extruded thermoplastic bead while it is still hot and pliable. The shaping wheel is servo controlled so it can track the direction of machine motion. The Thermwood machine is a full six axis system, five axes to position the head in any orientation and the sixth axis to align the shaping wheels to the machine motion direction. Thermwood has added a software feature to its Q Core CNC control called “Tangential Following” which automatically keeps the shaping wheel aligned with the direction of machine motion without the need for six axis programming. This eliminates the need for a specialized CAD/CAM system to handle the sixth axis and allows the use of virtually any five-axis CAD/CAM system to program machine motion.

Because of its five axis head configuration, material can be applied at an angle or onto a curved surfaces in addition to traditional horizontal layers. This capability opens new processing possibilities and supports free form additive manufacturing techniques not currently possible.

Thermwood’s initial test machine, which can print parts up to ten foot by ten foot by five foot thick, is expected to be fitted with a five axis “subtractive” gantry trim system in the next few months at which time all functions can be performed on the same machine.

Thermwood plans to continue this development effort with the goal of offering these machines in a variety of large sizes for commercial applications. Management cannot yet determine when the technology might be sufficiently refined for commercial rather than purely research and development applications. In the meantime Thermwood plans to continue working with material vendors, R&D operations and potential users in an ongoing development effort.